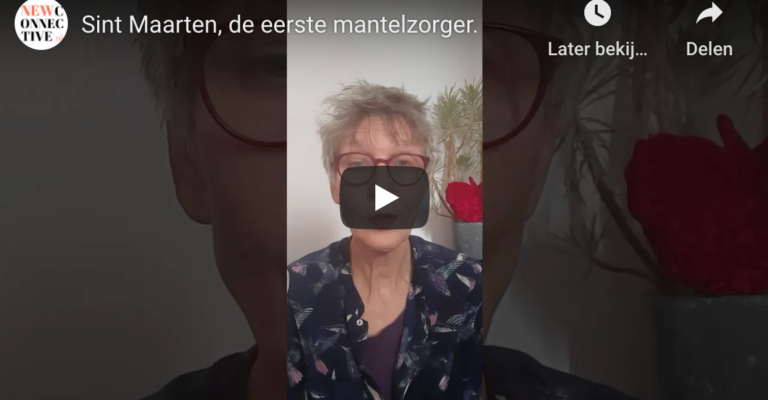 It’s the week of the informal carers. In Dutch we say: mantelzorger= caregiver, like a mantle or cloak. What kind of a strange name is that? Where does the name ‘mantelzorger’ come from?
Apparently the term was coined by one Johannes Hattinga Verschure, scientist in the field of hospital care in the 1970s and 1980s for care that people can provide to each other in addition to professional help. He thought about cloak, because he remembered that when you put a cloak around someone, you make sure they stay warm for longer.
And he probably also referred to the story of that old saint: Saint Martin by using the title mantle. The week for informal care is linked to November 11, the day of Saint Martin. Children in the Netherlands, Belgium, Germany know Saint Martin like no other: the big party for children, which is now probably not or different going to be celebrated because of Corona, the feast where children in groups in the evening with lanterns go door-to-door, singing songs etc. and get sweets. What do informal care and Saint Martin have to do with each other?
There is a very old legend about one Martin in the year 350 AD. He was a son of Hungarian-Romans. He joined the army, became a soldier or perhaps an officer, and when he was once near Amiens, a town in northern France, he saw a beggar there. He was so concerned about the man’s fate that, according to legend, he took off his own coat, cut it in two with his sword, and gave half of that coat to the beggar. Why only half? One explanation is: that cloak belonged to the Roman army so he couldn’t give it away completely, but the other explanation, is the following: if you really share something, and you want to make someone warm, then it’s much better that you really share and that you can stay both warm. Isn’t that a very nice description of informal care? Saint Martin became bishop of Tours, so it’s an old Christian legend but informal care is not only Christian, but for and from everyone. #mantelzorg #Sint-Maarten